Iris ­B. Cegarra aka Iris Beatrix 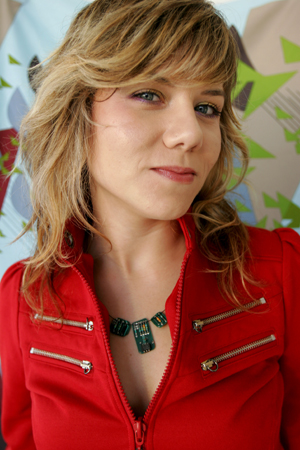 Venezuelan-American independent filmmaker Iris ­B. Cegarra Arbelaez has been dedicated to film and video production for the last eight years. She began her career under the name Moloko Pussycat Factory sneaking her camcorder into underground electronic music parties in Florida to capture the scene and the lifestyle for a twenty-minute “picture-book” film entitled Bass Frequency (2001). Her second documentary Electro Dziska (2003), a more in depth look at the uprising of electronic music, received international acclaim and was globally showcased in Europe, the US, and Latin America.

Along with partner Rob Guertin (Uprokk) they formed Mi Chica Chico Force and toured the Northeast of USA and Europe simultaneously during electro events to promote Electro Dziska and shoot her third film, an award winning documentary, screened in over 12 film festivals around the world, Darkbeat: An Electro World Voyage (2006).

Her quest was to uncover the roots of electro music in Europe though she eventually found herself in Detroit, Michigan, one of the birthplaces of electro, thus the “Electro World Voyage” began.

With a Masters in Film Production and an honoree of the Wall Of Fame of the Art Institute’s MIU (Miami International University of Art & Design), Iris B. Cegarra has produced, directed, and edited music videos for legendary freestyle artists such as Planet Patrol III, Italo-Disco singing sensation, Sally Shapiro, and pop/rap artists such as Pitbull and Lil’John. In addition, her experimental video collages and documentary work have been featured at local Miami Art Galleries like Hardcore Art Contemporary and Antikulture, during Winter Music Conference events like Ultra Music Festival and European events like Bloc Weekend in England.

At the preset time, Iris B. teaches Final Cut Pro’s Digital Editing and Filmmaking classes at MIU and has been a freelance editor for The Cut Club, Rakontur, a hip-hop TV show called “Keeping It Real With Della”, amongst many other independent producers and edited and co-produced a scripted teen series pilot called “M.E.S.H. Academy.” She has also been pursuing a new venture as a Live Video DJ (VJ) with partner AV8, at local music and art events.

"As far as my VJ'n style, I mainly mix old b-movie clips to the beat of what the DJ's playing (not so much into graphics and animation type of VJ'n). I usually tag team with my VJ partner AV8 but we do it for fun! I am mainly an editor (and aspiring "big-time" director!) at an advertising company where we edit TV commercials and are also on post for a feature film produced by Disney and Lions Gate for the Latin market coming out in March called "Sin Ella" ("Without Her"). I also cut some music videos for a fellow company, Creative Seen, here."

Her journey is far from over and she’s currently gathering footage for Darkbeat’s anticipated follow up film and becoming one step closer to “making history as the innovator behind producing the first Electro Musical.”