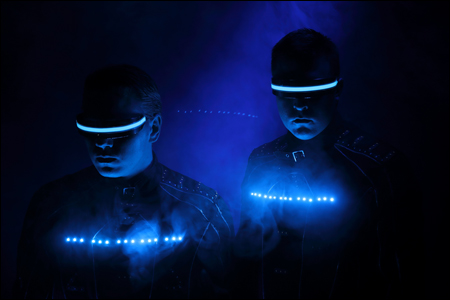 Blastromen is a Finnish electronic music duo, founded in 2003 by Mika Rosenberg and Sami Koskivaara. Their music is a mix of old school electro, synthesizer music, modern techno and electronic music that salutes the past and greets the future. Blastromen's musical themes drift between futuristic landscapes and sci-fi where complex and accurate modern production methods, catchy melodies and vocoder singing makes their music catchy and unique.

The history of Blastromen goes all the way back to the year 2003 when the duo decided to change their current musical style to a more electro influenced direction. The futuristic name 'Blastromen' was then formed. Soon, in year 2004 the first 12" EP vinyl 'Robot Aggression' was released on a Finnish record label X0X Records. Since then Blastromen has released a second EP called 'Blasteroids' and two studio albums called 'Human Beyond' (2010) and 'Reality Opens' (2014) on Dominance Electricity, that were also played in Dave Clarke's White Noise radio show.

From the first release Blastromen has been a popular name in the electro genre worldwide and has played live in several events in Finland, Germany, Spain and Russia. Their live show has developed over the years into a unique show including light jackets that are programmed to follow the music.

The year 2014 is Blastromen's 10-year anniversary when they returned back to the live stage after an intensive studio session. So far they have played in several festivals in Finland e.g. Lawatanssit, Lumous and a very special concert in Assembly Computer Festival with unique live visualization with VJ artist Sakke Soini. They also released a music video for the track 'Sidtroen' and visited a Finnish national television program called 'NEO'. Blastromen's third studio album is in the making and also a new spectacular version of the light jackets. The saga continues!