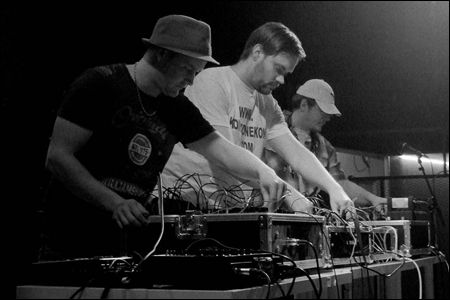 Konekonekone throws itself into the depths of electronic soundscapes. Their drones offer listeners meditative experiences while their sporadic electro nuances are liable to cause head nodding. Konekonekone makes music on modular synthesisers and every performance is built around improvisation. Sounds are constructed on the spot in front of the audience, thus every performance is a riddle even to the operators of the machines.

Konekonekone was formed in 2012 to fill a certain vacuum both in the hearts of the band members and in the breadth of electronic music on offer. The group consists of sound wizards Jesse Juup, Markus Kaunismäki and Ossi Hätönen from Turku, Finland in Europe. All members have been passionate about analogue sound synthesis for a couple of decades; surfing sine waves, grinding down the jagged corners of square waves, scraping saw waves and investigating the inner essence of the triangle wave. This passion has led to all members becoming closely involved in creating electronic compositions and soundscapes. Homemade instruments are strongly represented in Konekonekone.