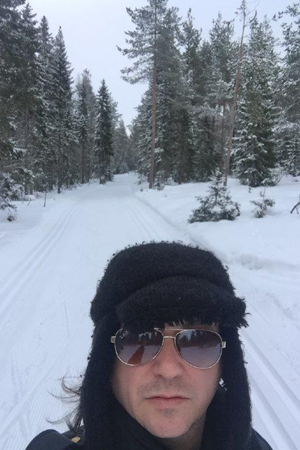 From the edge of Europe comes a child of the plastic age, a man of the final hour.

Finland's Jori Hulkkonen has never been the one to paint himself in the corner. With releases in the last two decades exploring 360 degrees on the musical radar, he's been hailed as "the most underrated producer in the world", "living legend of electronic composition" and "music's best kept secret".

Since the debut 12" in 1993, ten artist albums for F Communications and more recently Turbo Recordings, collaborations with people as verstaile as John Foxx, Jose Gonzales, Jesper Dahlbäck (as Kebacid) and Phonogenic (as Discemi), dozens of 12" singles on some of the world's hottest labels, and close to a hundred remixes for artists as diverse as Chromeo, Kid Cudi, Robyn, and Lydia Lunch, followed by producing albums for the bands Sister Flo, Villa Nah and NightSatan, and naturally the writing and production work on both Tiga-albums, all qualify as self-explanatory efforts of a passionate music aficionado. And that's excluding the sideprojects.

Eversince the mid 90's Jori has travelled across the globe as a DJ and played hundreds of clubs and festivals from Australia to Zurich - and every alphabet inbetween - spreading the vibe with his unique blend of house and techno, fuelled by insatiable curiosity about the music's future and profound understanding of its past.

Aside from the more traditional DJ/producer work, in the past couple of years Jori has raised some knowing eyebrows by assembling the Acid Symphony Orchestra, an experimental avantgarde techno ensemble of eleven persons, featuring ten Roland TB-303's, performing a raw score written, conducted and mixed by Jori. In 2009 the project received an approving nod from the highest authority available in the noble form of Ralf Hütter after the Orchestra had warmed up for Kraftwerk.