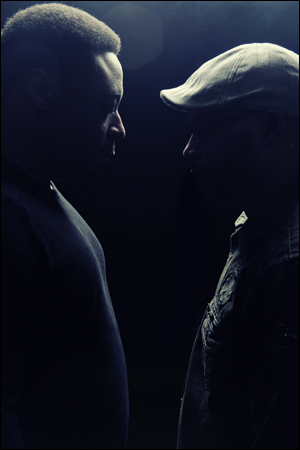 Techno is a family affair.

Arriving onto the electronic scene with "I Believe", featured on the monumental (10 Records) compilation "Techno 2: The Next Generation" (alongside Carl Craig, Marc Kinchen, and Jay Denham) in 1990, Octave One is the brainchild of the phenomenal native sons of Detroit, MI (USA), the Burden Brothers. The core unit of the band, made up of Lenny and Lawrence Burden (with revolving members of Lynell, Lorne, and Lance Burden), have had the privilege of bringing their high energy live shows to many parts of the world, including Australia, Belgium, Denmark, France, Germany, Greece, Ireland, Italy, Japan, Netherlands, Portugal, Romania, Russia, Slovenia, Spain, Switzerland, UK, and the USA, among many other places.

The brothers have released groundbreaking dance anthems on their own Detroit based record label, 430 West Records. Including DJ Rolando's "Jaguar", Random Noise Generation's "Falling in Dub" (the other Burden brother moniker), Aux 88's "My A.U.X. Mind" (on the 430 West sister label Direct Beat), as well as their own Octave One recordings: "Empower", "Nicolette", 'The X-files", "Meridian", “Love and Hate”, “The Greater Good”, and 'Siege". They have remixed tracks for such artists as Massive Attack, Akabu (Joey Negro), DJ Rolando (Jaguar), Steve Bug, John Thomas, Aril Brikha, Vince Watson, The Trampps, Rhythm is Rhythm, and Inner City.

2000 brought the most recognized Octave One release to date, "Blackwater". The massive hit has appeared on over 30 compilation albums worldwide (with sales exceeding one million collectively). It has been released domestically in 5 countries (US, UK, Spain, Germany, and Australia). The track is also been a classic on the decks of some of the world's best known DJs, Little Louie Vega, Danny Teneglia, Jeff Mills, Richie Hawtin, Kevin Saunderson, Derrick May, Jonathan Peters, Laurent Garnier, among many, many others.

Late 2006 brought the release of the first full length DVD/CD project from the group, Octave One featuring Random Noise Generation "Off The Grid", released in cooperation with Tresor Records/Germany. 2009 saw the release of the band's first studio album in 3 years, "Summers on Jupiter" released in cooperation with P-vine/Japan. Other Octave One albums have also highlighted the boys’ career: “The Living Key (To Images From Above)” (1997), “The Collective” (1998), and “The Theory Of Everything” (2004) among many other releases.