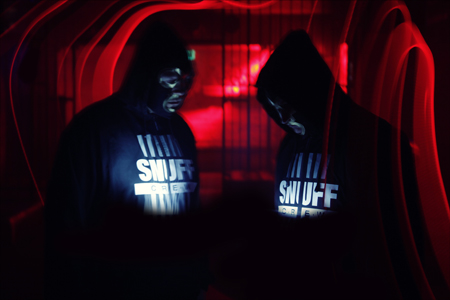 It is no secret that the Snuff Crew guys like to keep it oldschool. Since they started their project in the year 2008 they appeared with their Chicago House and Acid House influenced tunes and remixes on a lot of great labels like Rush Hour, SCI+TEC, Skint, Playhouse, Compost Records, International Deejay Gigolo Records, Skylax, Killekill and many more. For their productions they teamed up with legendary artists like Robert Owens, Tyree Cooper, Hard Ton, Billie Ray Martin, Kim Ann Foxman, Rachel Row and others. In 2010 they launched an own label called Snuff Trax where they bring out own tracks and music from artists they admire. The masked boys already played highly acclaimed live shows in world‐famous venues like Berghain (Berlin), Womb (Tokyo), Solyanka (Moscow), Social Club (Paris) and on amazing festivals like Wire (Yokohama).