DJ John Major, born Jani Savola, hails from northern Europe, Finland. John Major has been in the club scene almost two decades, and he is one of the key figures in the house and techno scene of his hometown, Turku.

There he's been involved with organising parties since the early 2000's. At the moment he is active with the oldest Finnish electronic music association, called The X-Rust Organization and also a club concept called rubiX. The latter is a monthly club, which is focused on quality house and techno. rubiX has two residents, John Major and Basile Renaud.

Ojis started to make electronic music back in 1996 with Fast Tracker 2. After a couple of bad mistakes he decided it's better to let other people to do that job. He lived a few years just partying all around until he bought his first pair of Technics SL-1200 turntables.

When it comes to deejaying, Ojis doesn't mix smoothly or do fancy tricks with the mixer. He concentrates on reading his audience and building up an intimate atmosphere. Mostly Ojis plays music from deep house to Detroit techno and acid. 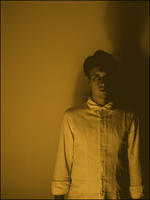 In addition to deejaying and making music under his own name, he's a part of dub techno/house project Toisvesi and explores the universe through analog synthesis with Syntetisaattoriorkesteri Galaksi.

Lazy Cat joined X-Rust in 1998 when she started deejaying in local bars in Turku and met the X-Rust guys at a friend's party. She had just spent the summer in London, working and shopping records, and at first her record collection was all about Glasgow Undergound, Paper Recordings, F Communications etc. Very jazzy and mellow house. She wanted to play for people so that they too could discover and enjoy this wonderful groovy music.